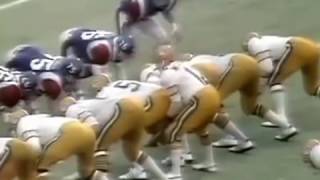 Back to the timeline
Memory shared by : Alouettes de Montréal

After beating Ottawa in the Eastern Final, the Alouettes flew to Vancouver where they faced the Edmonton Eskimos, a team they had never beaten in the Grey Cup.

Led by Sonny Wade, Don Sweet and Junior Ah You, the Alouettes battled through the rain at Empire Stadium, giving the Eskimos no quarter and easily winning 20 to 7.

You just voted for a Montreal Alouettes moment of history. You are now eligible to win an exclusive item sporting the Alouettes colours. Fill in the information below to finalize your application.

CONTEST! Vote for your favorite moment of history or publish a memory and get a chance to win an exclusive item sporting the Alouettes colours!

Your memory has been received successfully!

Back to the timeline